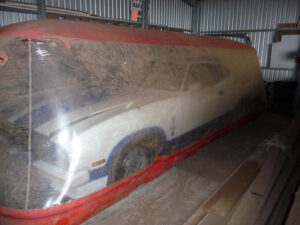 Extremely dusty conditions, this Carcoon has been operating faultlessly in these conditions for over four years.

Looking for pro advice on how to store a car?

The Carcoon Airflow System is the only system in the world that actively isolates, cleans and ventilates the air around the vehicle whilst garaged.

Dampness in the average garage is often the result of a build-up of condensation. This, along with poor ventilation, can create the worst environment to keep any vehicle, even for a short period of time. 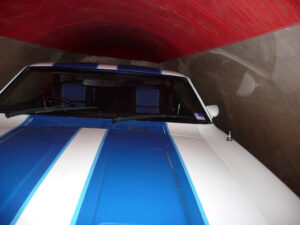 The vehicle remains virtually dust free even in these extreme conditions.

The moisture problem is exacerbated each time the air temperature within the garage drops below the dew-point (i.e. the temperature at which dew begins to form, which varies with the humidity and temperature of the atmosphere) when a little more moisture is absorbed into the building.

Later, as the air temperature starts to rise again, the potential for drying is greatly reduced, usually entirely due to the poor air circulation and inadequate ventilation within the building. 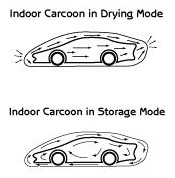 It’s a common misconception that the Carcoon achieves its high level of protection by flowing lots of air across the vehicle in order to keep it dry. Many a clone system has been launched on the back of this misconception. The fact is, this could not be further from the truth.

The Carcoon Airflow System’s award-winning design is primarily about dew-point (ie. the temperature at which dew begins to form) protection and reducing the volume of air surrounding the vehicle, thus keeping it dry and reducing the total moisture content within its proximity.

The creation of an isolated environment with a stabilising airflow within effectively stabilises the air temperature to within two or three degrees of the stored vehicle’s metal temperature. Cold air supports considerably less moisture than warm air, so it makes perfect sense to keep the storage temperature low and as stable as possible.

Once the vehicle is enclosed within its own environment, it’s easy to see what other benefits can be afforded to protect the stored vehicle. Within the enclosure you have control of the air throughout the entire chamber.  That’s important when you’re storing a car or motorcycle.

Air quality can be improved by filtering through anti-oxidising filters, thus reducing airborne contaminates/pollutants. Unfortunately in this modern industrial age, Chlorine- Benzene- Sulphates-Acids and lots of other hazardous compounds are now considered to be ‘common airborne contaminates’. 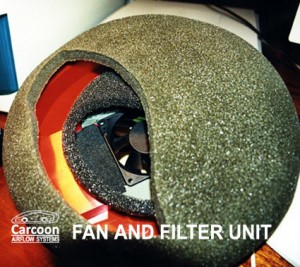 The Carcoon Airflow System uses Activated Carbon Filters held under super-atmospheric pressure to ensure maximum benefit within the internal isolating airflow. By creating a ‘cocoon effect’ for the entire vehicle, even its underside (you could argue the most important part) is protected from rising moisture.

It’s quite a scary thought when you consider that once the air inside a Carcoon has had time to stabilise, it’s probably cleaner than the air you’re breathing right now!

In the mid to late evening, as the air cools and drops below the dew-point, it immediately starts to rid itself of excess moisture. The colder it becomes, the more moisture will be expelled. Several hours later and it’s a new day. The sun starts to rise, and the air temperature within the garage starts to increase, and begins soaking up some of the moisture deposited only a few hours earlier.

How does this affect my garage? 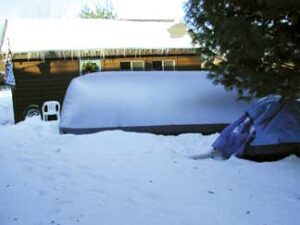 Poorly insulated garages (in reality, most) will be subject to increased temperatures, sometimes even higher than the external ambient temperature. This means that the air within the garage will not only take on moisture from inside the garage environment, but under certain climatic conditions it will also take on moisture from outside, as the external ambient air finds its way into the building.

Under these conditions there will be more moisture supported within the air in the garage than is outside in the open air. Poor ventilation will keep the moisture locked within the building. Over ventilation will let in more moist air than necessary early on in the proceedings. Subsequently, again, as the temperature starts to drop, the garage environment will be the first to reach the dew-point, and could end the day with more moisture than it started with.

Consistent temperature is key to store a car

This is all part of the normal 24-hour cycle during wintertime. Some people simply heat the garage in an effort to keep it dry, or more importantly to keep the vehicle dry. As long as the garage doors remain closed, and the temperature is maintained throughout the 24-hour cycle, this is an adequate – if not ideal – solution. Brett and our team at Carcoon can advice you further as to how to store your car, simply give us a call or visit us in store today!

However, heating the garage doesn’t remove water from the air. The resulting drop in relative humidity after turning on the heating simply demonstrates the extra capacity of the air to support moisture. 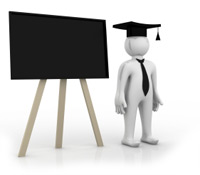 Therefore the rule of thumb has to be: If you heat your garage, keep the heat low and heat it day and night. Or alternatively, don’t heat it at all!

One thing is perfectly clear, the higher the humidity, and the greater the temperature drop, the heavier the condensation. Historically, only governments could afford the expense of pressurised temperature and humidity controlled buildings. These buildings cost millions to build, and are very expensive to run and maintain.

Running a dehumidifier in the average garage without controlling the airflow can be an expensive and futile attempt at controlling the moisture content within the garage. Sometimes it’s more like an attempt at dehumidifying the whole neighbourhood! If you really want to protect your car properly, keeping it dry is the obvious one, but in this modern industrial age there are also other important considerations.

In most garages the floor is the first place to collect condensation. The problem when using an ordinary car cover is that as the moisture starts to dry, it’s allowed to rise up into the vehicle. It can then become trapped under the cover itself.

Most manufacturers of ordinary car covers have considered this problem, and claim that their cover will breathe and let the moisture pass through. The fact is, if the cover didn’t let the moisture through, it would have serious implications. As it is, moisture is very slowly passing through the cover, and this now-damp cover is resting directly on the vehicle.

It is also worth noting that the condensation you can see, on the outer panels is less than half the story. All double skin box sections, chassis sections, doors, reinforcing panels and the like are ventilated, and it’s absolutely essential that they are.

You may ask why is it so important that all these places are ventilated? Well the answer is fairly obvious. When the air drops below the dewpoint and deposits its moisture on the external panels, the inside panels soon follow. Without adequate ventilation, trapped moisture inside these sections would reap havoc, destroying these essential panels within a very short period of time.

Ventilation holes of all shapes and sizes are there to help draw out this moisture as the vehicle flows through the air whilst being driven. The latest generation of cars make great use of ventilation throughout the entire structure and this is a very effective anti-corrosion solution.

If the vehicle is not being driven on a regular basis, protecting against condensation becomes even more important, in fact essential to the life of the vehicle.

The Carcoon Airflow System is the only system in the world that actively isolates – cleans and ventilates the air around the vehicle whilst garaged.  That’s how to store a car so it remains in pristine condition.