Carcoon offers the Tyre Tote which is a tyre carrying and storage system that alleviates the mess and strain of seasonal tyre change. It is ideal for short or long term tyre storage solution.

The Tyre Garage is another innovative and new product that allows you to keep tires outside to free up extra space in your storage areas.

Find out more information on tyre protection and storage.

Carcoon workstations are a new introduction that helps protect the environment from harmful emissions released from materials used in repairing motor vehicles.

The mobile workstation is a portable cross-flow ventilated workstation that uses a three-stage procedure. It is fully equipped to perform repairs and carry out all the tasks that can be carried out in a traditional shop.

Find out more about the benefits of Carcoon workstations which are available in a range of sizes for a variety of purposes.

Your car is an expensive investment, so you want to do everything you can to keep it in the best condition possible.

Our top 3 tips for keeping your car in shape include:

One of the largest Carcoon’s produced now houses the Leyland Atlantean double-decker bus known as the ‘Peace Bus’. The bus was purchased in 1982 by the People for Nuclear Disarmament from the NSW Urban Transport Authority.

It operated as a mobile PND education centre, promoting the cause of nuclear disarmament and world peace. The bus travelled over 24 000 km and was visited by more than 40 000 people between 1984 and 1987.

When not on public display the Peace Bus will be protected in its Carcoon, keeping it preserved for future generations.

With Carcoon’s rent to own you can get the Carcoon protection you want now without having to pay all the money at once or having to wait till you have the funds.

Rental terms available for 12 months or less and if you make all the required rental payments, the Carcoon becomes yours to keep. It’s that easy.

Carcoon also offers you the option of purchasing your rental items at any time throughout your rental agreement. 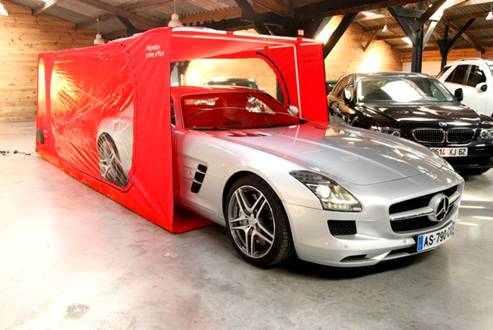 It’s been full on here at Carcoon, neat new product, fabulous new website and plenty of activity on the fun side of things too. Here’s some of the things we’ve been up to.

Carcoon’s new mobile workstation/spray booth and is now in production, our demonstration unit is available for personal demonstrations, give us a call if you’d like to see how it works it’s a pretty cool piece of kit.

We’re absolutely thrilled to be launching our new website. It’s packed with information about our products and services, and how we can help you to care for your classic cars.

Our range of carcoons is bigger than ever, and we’ve also got Bike Bubbles, gear to protect your tyres, and spare parts.. You can buy right from this website via the new online shop.

Our Frequently Asked Questions page should answer any questions you have. If you still have questions, please feel free to get in touch!

The very first Holden, some would say the embodiment of our national pride, is now safely housed at the National Museum of Australia in Canberra. The NMA opened in 2001, and in 2007 acquired the very first Holden prototype model, built by hand in 1946.

It’s a 2.15 litre, six cylinder, four-door sedan with an unmistakable shape. Fully restored to her former glory, now rests comfortably at the museum in a Carcoon!

In the words of Eric Archer, Conservation Manager at the National Museum of Australia:

The historic motor vehicle fleet at the National Museum of Australia is stored now in these plastic bubbles with positive air pressure keeping the dust off them. It’s an ideal and a very economical way of storing these kinds of collections.